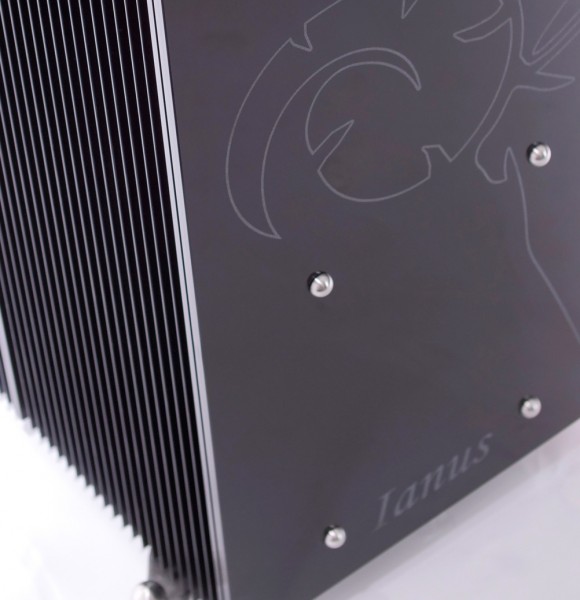 Beschreibung Bewertungen 0
Beschreibung
We are very excited to work on this project, and is to be launched in Q4 2020. Th Essentia... mehr
Menü schließen
Produktinformationen "Aries Cerat | Ianus Essentia Mono Endverstärker"

We are very excited to work on this project, and is to be launched in Q4 2020.

Th Essentia amplifier uses the same TriodeFet technology, but has features that make it unique in the already innovative Ianus range.

In contrary to the bigger Geminae model,the Essentia is using the TriodeFet active element in a very different topology, as this is a Single Ended design

This Essentia design, is not only Single Ended, but it is also a Single Stage ! There is no driver stage and no input stage!

This extremely simple topology is an elsusive design goal for many, including our lab.It is only possible to execute now, as we are finally able to use an active element that has the needed specifications for the purpose: Extremely high linearity, high voltage gain , high current gain and very high input impedance. The Essentia, is, as its name suggests: Consisted of only one TriodeFet stage, fed directly, and used as a simple SE amplifier. Uses only the “Essense” of the Series technology.

Inputs will include our proprietary AC link input, as well (as an option) the Transformer Volume Control (TVC) variable gain input ,which is also found on the bigger brother. The triode-like transfer curves of the TriodeFet means that it sounds like a true SOTA SE tube amplifier, but is able to deliver more current, is maintenance free (the internal tubes used for curve creation are rated at 10,000 hours lifespan) and its unique single stage nature means that it is as sonically transparent as it can get.


Our Ianus Series amplifiers is a showcase of our unique TriodeFet technology.

After years of developing and refining our technologies we are proud to introduce the TriodeFet technology, and our Series of amplifiers that implements this truly innovative technology.

The Ianus Series is promising to offer a fourth and final answer to the tri-lemma of: Tube vs Solid State vs Hybrid battle.

The TriodeFet is not a Hybrid technology but a rather new way of using hollow and solid state devices.

A bit of history.

We developed an early version of this technology back in 2012, and launched our first design using the TriodeFet - the Ianus monoblock.

After 7 years of rethinking how we could further refine and retune the system, we developed the second generation of the TriodeFet technology.

Below is the characteristic transfer curves of a typical triode.

Triodes are probably the most linear active element engineers have ever invented. Their linearity is unmatched by any silicon based active element. However, the triode is a high-output impedance, high voltage/low current device, making the use of impedance matching transformers mandatory when driving low impedance loads - such as our loudspeakers. In a hybrid design, a tube will usually provide voltage gain, and a transistor stage will act as current buffer to the low impedance load (speaker).

However the problem arises when you try to implement circuits that are designed to be only using tubes together with circuits designed to be only using transistors. For each of the voltage and current stage, regardless of being tube or solid state, the transfer curves of each active element will dictate the distortion characteristics of each stage (voltage and current). Not only in level, but also (especially so) in harmonic distribution.

So…What if we had a low voltage/high current active device, which had the linearity of a triode and at same time would be able to source enough current to drive low impedance loads directly?

The TriodeFet, can be seen as a three terminal active element, just like a Mosfet or a triode.

The real breakthrough is that its transfer curves are identical of a true high quality triode, with the only differentiator from a true triode is that, the Y-axis (current) is in scaled in Amperes and not milliamperes.

What this means, is that you can design circuits that were never before possible either by using tubes or transistors. This new active element can be used to develop simple, very linear circuits, which are stable down to very low impedances, while the TriodeFet’s inherent linearity is making the use of the problematic negative feedback redundant.

By using the Triodefet device as output active element, we can make full use of its triode like transfer curves, and transistor-like low voltage/high-current operation, and come up with very simple and straight-forward designs that have very high linearity, benefiting from the inherent linearity of the TriodeFet. This new active element can be used in very high bandwidth circuits, with high degree of linearity, without the use of global of local feedback, or use of other degeneration techniques etc.

Proudly present,the first amplifier to launch our of the new Ianus Series is our flagship of the Series, the Geminae.

This is a Class A amplifier, using a floating circlotron using TriodeFet elements as output stage devices. Power delivery is 130W @8ohm 260W @4ohm while never leaving true Class A operation, even at very low loads.

In contrast to the majority of “Class A” amplifiers, (which are biased at 1-3A max) where they only deliver a fraction of their rated power in Class A mode, the Geminae is a true Class A design.The active elements never go into cutoff even at full power at 4ohms.

In order to be able to deliver all its power in Class A, it is heavily biased at 12 Amperes idle (idle current is user adjustable),and its OTL TriodeFet output stage is working as a floating circlotron. The topology belongs to the Circlotron-esque family, but vastly improved, in terms of distortion, output impedance and reliability.

We called this topology a Super-Symmetric Self-Balancing inductively driven Circlotron. Zero feedback loops are used, either local or global.The floating circlotron is self-centering/balancing and does not need any long term adjustment or DC servos to stabilize, constant bias adjustmnent or correcting mechanism to eliminate DC voltage offset at its outputs. The AC decoupling of the stage is accomplished using custom super-spec capacitors. These special capacitors have internal resistance (ESR) less than a piece of copper wire (less than 2mohm), and are designed to be able to surge to 30,000A max. They are the most transparent capacitors associated with current delivery.

The Geminae amplifier is a two stage design .The input stage is a transformer-coupled small SET amplifier based on the E280F supertube,loaded with a specially designed transformer,with geometrically and electrically balanced windings.It is powered by its separate tube rectified-double choke filtered PSUs and low noise negative bias system. The input stage drives the TriodeFet stage by floating secondaries of the coupling transformer, so the floating/self-balancing nature of the output stage is not affected

The amplifier is fully adjustable on-the-fly

The input and output stage are monitored with a bias monitor system for all parameters of the TriodeFet system and real time adjustments, while the input stage bias system can be monitored and adjusted as well in real time.

The topology does not need any servo correcting mechanisms, nor any feedback nests / loops or output monitor / relay protection system. The system is protected by real-time non-invasive protection circuits that will sense any overcurrent of the output stage and put the amplifier on stand-by. You cannot damage the amplifier even by shorting its outputs.

Stable down to 1 ohm

Idle power consumption per channel: 380-600W depending on bias setting)